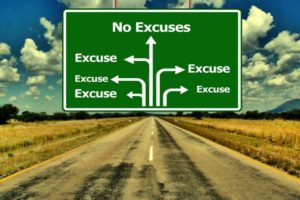 Countless individuals each year jump at the opportunity of making an online income. After all, it looks so easy and highly rewarding, right? I mean, who wouldn’t get excited at the chance to make money while sleeping or working while at the beach. You have to admit it can be tempting. Heck, not having to wake up early and rush to work. That’s probably the dream for many people who charge into the unknown realm of online marketing.

Have you heard this before, “If you want it, you’ll find a way-and if you don’t, you’ll find an excuse?” In a way, this is true, but you also have to take into account other elements like fear, lack of confidence, self-discipline, uncertainty, risk, decision-making, motivation, etc. that can also play a key role as well.

The reality is that many of the individuals who jump into internet marketing will eventually give up or fail. Of course, that’s after spending money and time going around in circles, never accomplishing anything, and never making a dime. Even though a good portion of their struggles can be tied to learning, the major problem for many beginners that keeps them from reaching new levels is simply based on excuses (or more importantly, the lack of focus).

Here’s a look at 5 of the most common excuses often used by beginners which you’ll frequently notice popping up within the internet marketing realm.

Nothing works and I tried everything

You could say that this is one of the top excuses out there. “I tried everything and didn’t see any results” Next, they’ll probably suggest it’s a scam. Yes, there are some products, tools and strategies which could easily be classified as rehashed material, sub-par, or even useless with the technology that’s available today. However, and in most cases, a good majority of the marketers simply fail to give it a chance. They might even use the product a couple of times, but in the end, they simply give up and quit. If you want to see any type of success online, you need to allow a learning curve. Failure in many ways is going to happen, it’s simply part of the success online. Some things will require determination, but more than anything, effort.

If you were to sit down and write a short report or even an eBook and instantly expect to be recognized as an established author, think again. It takes time to learn some things before you get the hang of it. The key is to simply keep trying. Soon, you’ll figure it out and eventually you’ll see a return on everything you put in.

People will see me as being dumb

Well, here’s something that is definitely real…fear! This can be one of the biggest hurdles in the MMO niche, especially when developing products and given the possibility that it might suck.

Nobody likes being judged, that’s just human nature. Imagine others saying your product is crap. Well guess what? It happens…so what are you going to do? You could do nothing or you could raise your head up and do it again. Seriously! Listen up, it really doesn’t matter what the other marketers might be thinking. Why? Because you’re going to be judged whether you like it or not, and no matter what you do. So, keep your head up and keep pushing forward.

This really isn’t for me

Okay! Then what do you want to do? What are you expecting? The MMO niche is not the only way to make money online. There are literally countless niche markets available for you to work in. If that’s still not something that interests you, how about the rising and popular Ecommerce market, or maybe some of the popular affiliate programs. How about writing? Not your cup of tea?

Yes, there are many programs that you can choose from. Find a program that interests you and gather your strengths. Build on your strengths and keep pushing forward with them. Who knows, you might be surprised with many of the programs out there that will work for you.

Others tried it and they failed

Guess what? It’s still an excuse. If you picture anyone else who tried and failed and instantly believe that the same will happen to you is totally insane. The chances of you doing a project in the same manner as others will be minimal. After all, you’re not like the others, you choose to do things differently and better. You’re hard working, motivated, and above all else, determined to make things work for you. Don’t fall into the trap of thinking that others have failed and so will you. Believe in yourself and get things done.

The time is not right

If not now, when!

The best time to plant a tree was 20 years ago. The second-best time is now.  Chinese Proverb

Earl Nightingale, once said, Never give up on a dream just because of the time it will take to accomplish it. The time will pass anyway.

How true that is. We can’t change time, so we might as well do something. If you want to make a difference for yourself and part of that is making money online, don’t you think it’s time to start doing it? Why wait? Why continue to put it off for another day? Is something going to change? Probably not, so there’s really no reason to wait. Nothing steals the precious time we have more than procrastination.

If you decide to create and develop a product such as a book, a software, an app, a plugin, or even a course, and you know it will take you 6 months…ask yourself this – what will happen towards the end of these 6 months?

More than likely, your answer will probably be – nothing. You shouldn’t allow the time it will take to create something scare you. Imagine, if you begin your project today, within 6 months you’ll have your product ready to sell.

If you fail to take action, 6 months down the road you’ll probably be sitting there doing the same thing and wishing you’d just gone ahead and started.

These excuses have caused countless people to give up on their dreams. The key is finding out how to get things done. The reality for most people is thinking why things can’t be done.

The basic key to success is action. Since that’s the case, success will happen when you stop making excuses. So, get yourself motivated, suck it up and take action now.

To achieve greatness, start where you are, use what you have, do what you can. – Arthur Ashe